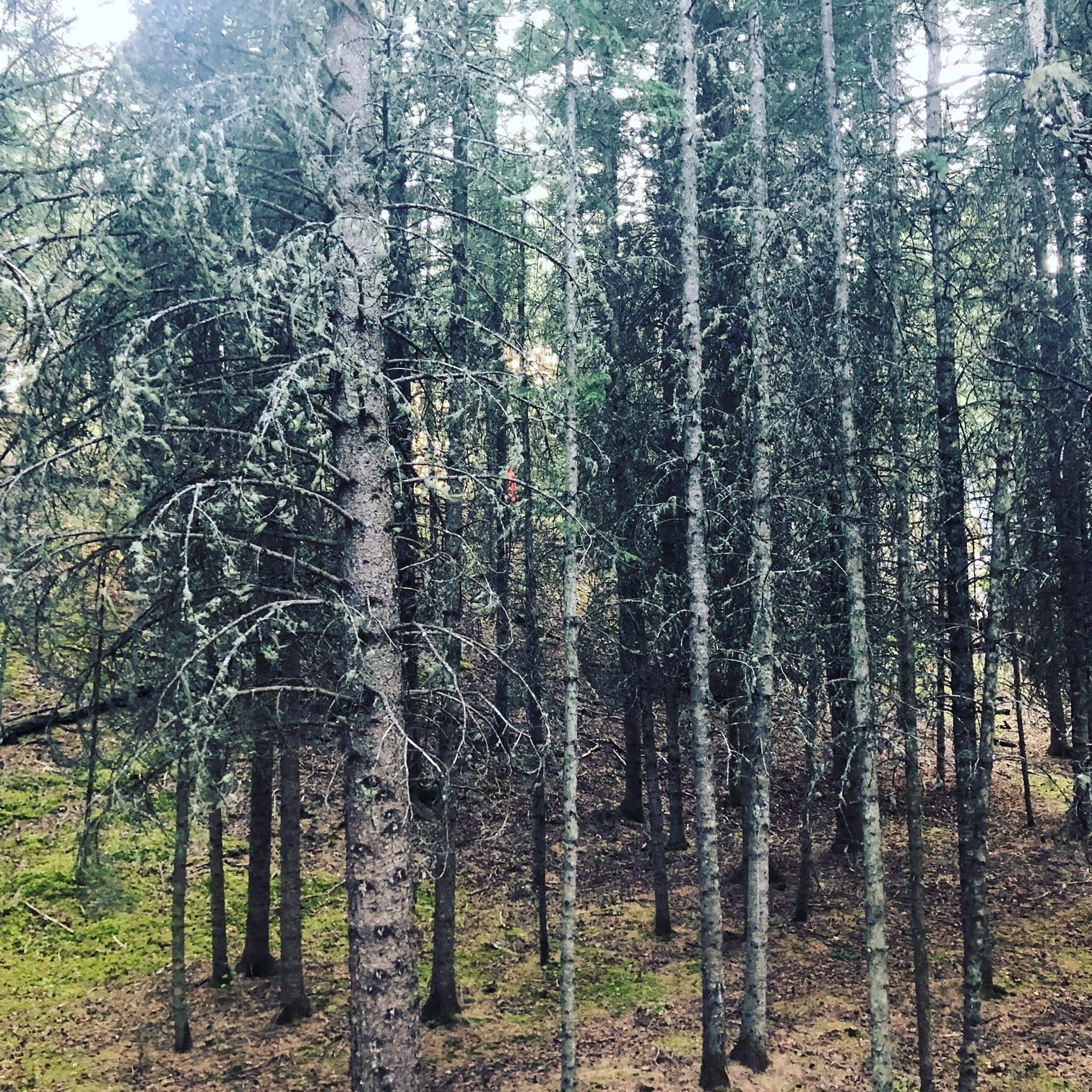 First off, we wanted to thank the wonderful folks in Waiparous for their hospitality and support when we were out with Velocity Networks for the installation. As you know, we didn’t get to all ten houses as planned within these first two days.  But we’ve connected five locations, with four homes receiving broadband as of today, since the first home is just the network starting point, and did not need broadband service from us.

Getting the microwave links onto home #1 from the cell tower was not difficult, but the hop from #1 to home #2 was a tricky angle, with many trees, and caused a lot of debate and repositioning.  Also, home #2 needed three units mounted on it, and we had some issues in getting the best positioning angles established. This put us behind our expected schedule, but we carried on to home #3 even though the first link wasn’t quite ideal yet. Luckily home #3 was an easy hop, with a strong signal, and the homeowners were very accommodating of our changing schedule!  The day ended well, proving out our equipment’s robust capabilities through trees.  It also helped us to learn a few things for the future, such as which kinds of tools we should bring to make the job easier, prepping our equipment setup, and simply having a sandwiches and water to get through the day.  We were fortunate that the Velocity installers were so knowledgeable in the hardware, and helped us avoid some key technical problems.

It seemed like everyone started the day exhausted from the day before (definitely sore backs and feet) and it required a good dose of patience to realize that we needed to move and reinstall equipment, partly due to following industry conventions of using rooftops as locations.  In fact, we discovered trees are far better tackled at lower elevations than high ones, as the trees are thinner at the bottom. After some good hands-on tests of the signal strengths, we again found our momentum and carried on.  We corrected and mounted the hops between homes #1 and #2, and then went on to connect #3 to the hop, which was a two-home site (owned by the same person), so we’ll call it #4/#5.

The hop from #3 to #4/#5 longer than expected.  There are immediate trees around the homes, a ridge, a downhill, then and another uphill, then the house is even higher….we couldn’t see it at all, so it was nearly impossible to determine how to point the antennas.  We were wandering through trees hanging our fluorescent vests as markers, trying to create straight lines to reach and find connect the two houses, and driving around as well. Finally, success! We found the correct aim, and got a great signal to a fence.  The homeowners were super friendly and told us they’d just installed a conduit we could use to run a cable to their other home, so we got two homes for one hop!  Yahoo!

Velocity stayed at these homes to finish the install of the home routers, and we went on to the house #6.  We were really pleased to see that when Velocity was finishing at #4/#5, the homeowner had her iPad going, and her grandson came running out and excitedly asked, “Is there internet inside now?”  After she nodded, we saw him run inside and then back out again, saying, “I need the password Gram!”  Our guys had a good belly laugh when they heard her coyly reply to him, “Are your chores done?”

As to the unexpected location of the radio being low on her porch, the homeowner also told us she didn’t mind us mounting it there, saying she was glad they weren’t “big and ugly” like the satellite dishes on other homes.

By the time #4/#5 homes were fully installed, Adam, one of the Velocity installers seemed genuinely impressed. We heard him say to the homeowner there, “You’ve got internet, and you’ve got amazing speed!” Then he told us, “I just tested the speed, and we haven’t dropped any speed along the entire pipeline!” Gary (who was assisting Sisso) proudly replied, “That’s the magic in the Mage.”  Despite this terrain and trees in Waiparous, everyone is now very confident that this actually is going to work!

Our team had a bit of time leftover on Day 2 to test the signal to home #6 well, using hand-held equipment.  By then Velocity’s installers had some good suggestions as to how and where to locate the equipment. It appeared they were really getting the hang of it.  The test worked very well, but we’d run out of time to implement and install it that day….in fact our install team had really run out energy  – hiking through trees and doing this kind of work is quite physically demanding, and they were simply exhausted.  We did tell the homeowner we’d be doing some fine tuning of the network and get back to him as to an installation date.

We had a few bumps in the first couple weeks after installation, and most of these have already been resolved.  The network is running well, and we’ve seen data usage of the 4 homes in the network reaching as much as 22.9 GB/day.   But it can do even better with some minor upgrades, which are being rolled out soon.

1.  Moving the starting point: The first hop (from home #1, which is only a mount location not receiving service, to home #2) is working, but we’re not entirely happy with its signal strength. We believe we might be able to start the network at house #2 instead. This would give house #2 a much stronger signal, and make the whole network run better.

2. Setting up monitoring: The existing network firmware does not allow Velocity’s monitoring software to access the information it needs; it requires a monitoring software layer set up, which we call this a VL2, a second “virtual layer”. Without VL2 functionality, homes can experience either very fast or very slow service depending on who else is using the network, and for what (e.g. watching video, or just doing emails).  The software upgrade will monitor and regulate the use of the bandwidth and look for problems. Mage just completed development of the VL2 software this week, and we’re testing it now.  Velocity should have it implemented and running some time next week.

3. Homes awaiting service: One of our lessons learned during this process is that the final four homes in the original network would probably not be reachable without some intermediate homes to provide full connectivity. We decided that rather than install the next homes when the first ones aren’t quite ready, we’d correct these ones and then get to homes 6 through 10. We do have one final issue:  There is one hop that is too long to reach, and we are going to see if we can get permission to locate at an ideal spot.  We might need another neighbour or two to join the network. Trees are very thick and sight lines difficult, but with another hop, we’ll should be fine. Velocity and Mage intend to identify the intermediate homes needed and/or select a new set of homes to connect. For now, we want to monitor and ensure the performance of the network is our satisfaction (and the homeowners’ too) before going any further.   If you’re a homeowner  in Waiparous, we encourage you to stay tuned for more information coming soon.

We’re a far cry from being good woodsmen here, but we’ve come a long way in the past month, thanks to the folks in Waiparous and the ISP, Velocity Networks, giving us this opportunity. And while we’re on this topic, we must also mention the great skill and patience of the install team at Velocity Networks….they caught a few problems for us before they happened, and their skill and preparedness has been critical to our success so far. Thank you Jason, Bob and Adam!

The type of network we are deploying is a world wide first. There is no available research or knowledge covering the types of difficulties we are facing. Despite everyone’s tremendous experience deploying traditional networks we are all learning and discovering new concepts. We are continuing to work and develop the best configuration for Waiparous; it is making us better as a company and a technology, and we are not going to rest until there is have fast, beautiful internet service in the enchanting mountain forests of the Village of Waiparous!